I think there is a lot to a name.  Names often lead to a first impression, an image of what something or someone might look like.  When “Forty Tears” arrived at the farm, I knew the name had to change.  Forty Tears is such a sad sounding name.  It conjured up sad images of lying in bed sobbing.  Frank needed a name he could grow into, a strong name.

His name selection reminds me of the book “Where the Heart Is”.  When the main character named her daughter Americus.  The main character felt that Americus, the name, demonstrated strength.  Frank needed a strong name.

Something he could walk into the field with, and be all big and bad, and say “I’m Frank.” It just didn’t sound positive or at all in his favor, walking into the field and saying “I’m Forty Tears” or “I’m Tears”.  Depressing.  Awful.  It had to go.

I honestly can’t remember how Frank was decided upon.  I do know that after selecting Frank, I spent hours looking through Frank Sinatra lyrics.  I was trying to find a song that Sinatra had voiced that described Frank.  I knew a few horses with the name Fly me to the Moon so, that was out of the question.  I started to dig deeper, and I quickly discovered that Frank Sinatra did A LOT of singing!

I came across Too Marvelous for Words and wrote it down.  I stared at it for a few days.  I listened to the song for several days too.   I was unsure if it was truly fitting or not.  I eventually decided it was “the one”.

Yesterday, while I was writing about how I got Frank, I listened to the song again.  I laughed and maybe let a few tears fall.  Happy tears.  I think you can listen to a song and enjoy the beat, the music and notice the lyrics.  I think you can also listen to a song and actually hear the lyrics and understand the meaning.  That’s what happened when I listened to the song yesterday.  I heard the lyrics and understood the meaning.

The song was written by Johnny Mercer and composed by Richard Whiting. I also learned that the song was used as the love theme song in the movie Dark Passage.  The movie starred Lauren Bacall and Humphrey Bogart (*swoon*).  What girl doesn’t love Bogart!?  Anyway, the song is an expression of love.  The lyrics are as follows:

Several other notable artists went on to record and sing the song as well.  Frank just happens to be my favorite of those.  At this point, I have to be honest though.  When I first got Frank to the trainers I was absolutely terrified of him.  He’s a smaller horse, but regardless I had seen what he was capable of and it scared me.  The trainers knew it too.  I would drive up to my lessons and the anxiety I felt was almost unbearable.  There were days I wanted to just not do it anymore.  I, obviously, didn’t give into that anxiety.  I knew Frank had anxieties of his own.  I ended up looking at our lessons as more of a therapy session than anything.  We needed to work on our communication and decoding of each other’s communication. 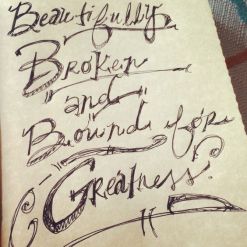 So, what makes this song so fitting?  I wasn’t sure if this horse would be a horse I could “love”.  I wasn’t sure if he was going to be this “horse of a lifetime” that I have now.  That has all been squashed.  Frank is too much and also very, very…to ever be in any dictionary.  There simply are no words, that I can find, to accurately phrase what this horse has done for me.  It is all too wonderful and I will spend his lifetime finding the words.  When you are so broken and beat down that the one thing keeping you together, is this horse who was also broken and beat down…it’s incredible and powerful.  There is so much power in that, finding a way to be whole again with just the company of a simple horse.